Top Ten Tuesday is an original feature/weekly meme created at The Broke and the Bookish.

Each week they will post a new Top Ten list that one of our bloggers over at The Broke and the Bookish will answer. Everyone is welcome to join.

This week’s topic is: Top Ten Characters I’d Like To Switch Places With For 24 Hours

I’d love to trade places with so many fictional characters. How to narrow it down to just ten?

IT may seem a little silly to want to change places with someone who’s fighting to the death in order to survive but I greatly admire many things about Katniss. She’s strong and brave, resourceful and intelligent. But I’d want to make sure that it wasn’t on the last day in the arena that her and I had our little switch of places.

I’d love to be a mutant and train at Professor X’s school for gifted youngsters. Maybe I’m a little older than most of his students, I’d still love the chance to have special powers and use them in conjunction with other mutants. And they get to save the world – very cool. 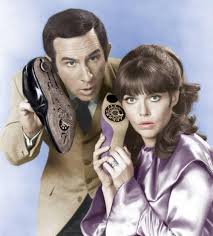 Not going to be any more specific than that I’m afraid. Because there are so many fantastic secret agents from books and film that I’d love to be. From Maxwell Smart and 99 to James Bond and Annie Walker (from Covert Affairs). Just imagine what a day in the life would be like… especially James Bond – getting to drive around in my ultimate fantasy car, the Aston Martin DB9

She might not be many people’s first choice of HP characters to switch places with but to me, she always looked like she was enjoying herself. She knew who she was and what she believed in. I also really like her way of viewing the world. She may be Loony to some but she’s lovely to me 🙂 And if not her, I think that Chloe Saunders from the Darkest Powers trilogy would be an interesting witch to trade places with too.

5. Elizabeth Bennett from Pride and Prejudice by Jane Austen

She’s intelligent and makes some tough decisions based not on what society would approve of but what is best for her. I admire her a lot and plus – I think it would be pretty cool to live back in the days when this book was set. And Mr Darcy.. he’s a plus too.

6. The Mad Hatter from Alice’s Adventures in Wonderland by Lewis Carroll 7. The Doctor from Doctor Who (or any of his companions)

I feel like I might be cheating since so many of my picks this week come from TV or comics or something that’s NOT a book here’s another one. I am a bit of a whovian. I even made my mother a T.A.R.D.I.S. birthday cake this year. And both the Doctor and his companions always look like even when things are at their most dire and the whole world is at risk of invasion or being blown up or whatever, they’re still grinning and having the time of their lives. And plus, time machine that’s also a spaceship? Best vehicle ever!

8. Daenerys Targaryen from the A Song of Ice and Fire series (aka. Game of Thrones series) by George R.R. Martin.

I’ve only read the first book in the series and seen the first two seasons for the show but I love Dany. She’s so much more than what she appeared at first and plus – I love dragons.

9. Jo, Bessie or Fanny from the Faraway Tree series by Enid Blyton

I loved these books when I was little and the appeal of being able to go into the Enchanted Wood and climb the Faraway tree with the chance to meet the different creatures that inhabit the tree and the magical worlds that it’s the gateway too… incredible.

10. Inigo Montoya from The Princess Bride by William Goldman